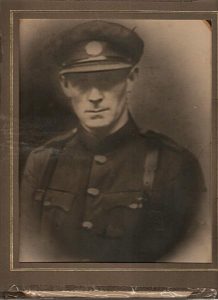 Five years ago I began to research the life of my grandfather, Michael McCann, a man who has haunted much of my creative writing since I first heard my mother’s stories about his exploits during the War of Independence and Civil War, not to mention the first World War. I’d written about his war record in two poetry collections, but now I wanted to explore his fictional potential for a piece of crime fiction, and so honed in on his experiences as a policeman in newly independent Ireland.

Grandad left the National Army in 1924 and, like many other ex-soldiers, joined the nascent Garda Síochána. To get further background on that part of his career, I contacted the Garda Archive in Dublin Castle to ask if they had a record of him. By return of email came an A4 document that provided the bare minimum: his badge number, date of birth, date of appointment (March 28th, 1925), the stations and divisions where he served, monetary awards received (for good police duty) and date of discharge (March 29th, 1945).

The final entry related to his total service (some 20 years and two days), and the statement “Exemplary Service”. Never have two words been more frustrating; I wanted to hear the details of that service, the cases he’d investigated, the turmoil he’d witnessed in the early years of the new Free State. But if those records were still held anywhere, I wasn’t getting access to them. 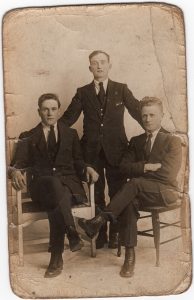 There’s nothing a writer likes more than a vacuum, because that’s what frees up the imagination and allows us to invent. I became convinced that if officialdom couldn’t give me the facts, some imagination backed up by historical research might help fill in the gaps. The more I read, the more it became clear that the new police force Michael McCann joined had been thrown into the deep end of an Irish society still deeply divided and lawless. What a perfect scenario for the fictional hero I was beginning to envisage.

Given the breadth of those divisions, the nature of the force tasked with guarding the peace was hugely important. In 1922, Gen Eoin O’Duffy and Kevin O’Higgins planned to establish a Civic Guard, or Garda Síochána, to replace the Royal Irish Constabulary. This force was to be unarmed and politically neutral, though answerable to the Government Minister responsible for their administration. By the end of 1924 and the beginning of 1925, with the Army scaling back (some 30,000 soldiers were made redundant and few had jobs to go back to), it was clear that this new unarmed police force might need strengthened resources.

As Conor Brady puts it in Guardians of the Peace, his history of the Garda Síochána, “some districts remained peaceful after the military had been withdrawn … huge areas of Cork, Kerry, Tipperary, Clare and the Border country immediately became open territory not only for the remaining active bands of Republicans who could find very good reason to rob banks on behalf of the Republic but also groups of ordinary armed bandits. There was, furthermore, a mushrooming problem of disbanded Free State troops turning to violent crime.”

O’Higgins and O’Duffy decided that a restructuring would be required to provide the sort of policing needed in a still highly unstable situation. So in 1925, the Garda Síochána and the Dublin Metropolitan Police were amalgamated and, as part of this newly unified body, a new entity was created, the ‘Special Branch’. The leader of this new outfit was to be David Neligan, one of Michael Collins’s original secret service agents and now a colonel in the Free State Army.

O’Higgins stipulated that members of the new armed detective team should be recruited from the Civic Guards and from the Free State Army Office corps. There were to be about 200 men in this new unit, divided between Dublin and 20 Garda divisions around the country. They were to be given six months of training in areas such as criminal law, police procedure, ballistic and forensic evidence and the use of firearms and self-defense.

My grandfather was appointed as a member of the Garda Síochána and joined the Special Branch on its formation shortly afterwards. He was stationed first in Letterkenny, before being moved to Ballinasloe in 1929, where he spent the majority of his career.

Although the Civil War had been over for several years, the Galway region was still pretty unsettled when my grandfather was transferred there. Ammunition left over from the conflict could cause security problems. On March 1st, 1930, there was a major blast at the back of Society Street in Ballinasloe, which led to the demolition of some shop fronts and the destruction of the offices of the local newspaper, The East Galway Democrat. As The Irish Times reported, “investigations were made by the Civic Guards, and it is thought that a land mine, which was probably hidden by someone who wanted to get rid of it in an ash pit or somewhere behind Society Street, was accidentally exploded”. Later that year, an Irish Omnibus Company vehicle travelling from Galway to Athlone was fired upon from a field on the Athenry to Ballinasloe road. And in September 1931, the Civic Guard barrack at nearby Kilreekil was blown up.

The more I read, the more it became clear that the new police force Michael McCann joined had been thrown into the deep end of an Irish society still deeply divided and lawless. Trouble never seemed too far away in Ballinasloe in those days. In April 1935, The Irish Times reported that that three shots had been fired into the house of Michael Killeen, Brackernagh. Mrs Killeen, who had been sitting near the sitting-room window, narrowly avoided injury. At a military tribunal the following month, John Keogh of Deerpark, Ballinalsoe, was tried and sentenced to two years in prison for the attack on Killeen, who had been secretary of the Poolboy and Kellysgrove Peat Development Association. In 1941, my grandfather gave evidence in a court case involving a husband and wife in whose house guards had discovered a cache of ammunition and bank notes. According to press reports, Michael had been part of a group searching the house and had discovered the cache “in a groove cut out of the leg of the table”.

My uncle, Liam McCann, (now deceased) also remembered an event from the early 1930s. There had been a hurling match in Duggan Park in Ballinasloe. It got out of hand and my grandfather arrested a man and brought him down to the barracks. A mob came down to try and storm the barracks and Granddad had to fire a gun over their heads to disperse the crowd.

So there was no shortage of incidents that could fuel the fiction I was planning to write. My novel, titled The Branchman and published this month by Arlen House, incorporates some of them and invents many others. It features a newly appointed Special Branch Detective called Michael Mackey, assigned to the Ballinasloe police barracks with the task of discovering the subversives at work there. Of course he bears more than a passing resemblance to my grandfather but, as with many fictional heroes, has his own characteristics, flaws and plot points, which almost certainly never happened in real life, or at least not in the way I tell them here. But that is the joy of historical fiction; it presents an alternative reality. If the writer can make the reader believe in that reality, at least from the first page to the last, she has succeeded in her task.

As this decade of commemoration advances, more and more stories are being unearthed about the unstable society that the new Free State attempted to pacify in the aftermath of Civil War. It’s a rich subject for fiction; I look forward to reading the many imaginative responses that will undoubtedly follow.

A version of this article first appeared in the Irish Times on 19th September 2018.