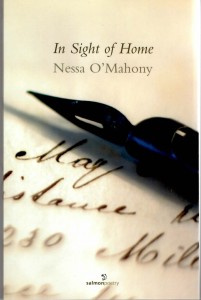 Sandeep Parmar reviews
In Sight of Home
By Nessa O’MahonyIt would be too simple to evaluate Nessa O’Mahony’s most recent work, In Sight of Home, on the basis of whether or not it succeeds as a ‘verse-novel’. And yet with the current surge of interest in the form (to the great excitement of ever-present forefinger-wagging genreists) each verse-novel sets itself a near impossible task: balancing the presence of often tedious narrative (see Ruth Padel’s Darwin: A Life in Poems) with the exploration of character through lyric. The trouble, in the case of Padel’s book, is the spectre of Charles Darwin, transmuted through the poet-biographer, whose voice clangs over epistolary prose. O’Mahony could have operated via a similar procedure: we know that some of her book is based on what appears to be twenty-two letters from Margaret Butler, a nineteenth-century Irish emigrant to Australia, but thankfully O’Mahony departs from the day-to-day recounting of domestic life to make an implicit inquiry into the nature of the archive and the relationship between the reader/scholar and the historical subject. She inserts a figure of herself, the author—in the form of a twenty-first-century Irish woman, Fiona Sheehan—as discoverer, hoarder, and voyeur of a woman’s ‘failed’ life.In Sight of Home brings together three narrative strains: Margaret’s departure from Kilkenny with her brothers and sisters and their subsequent life in Australia; Lizzie, another young Irish emigrant who finds herself in service of the Butler family; and Fiona, a poet who is seduced into writing Margaret’s story by letters she receives from a Butler descendant. Fiona has her own self-exile to contend with—she moves to North Wales to sever family commitments, only to find herself identifying heavily with Margaret’s life as a spinster, overburdened by a woman’s responsibility to her kin. Contemplating leaving her life in Ireland behind, Fiona is drawn to the letters:I picked up the pack of letters
I’d been flicking through
for the past few days.
Although the writing was faint,
the slanting scrawl near illegible
I could still glean some of their meaning.

And one can see what this ‘meaning’ is. Margaret’s life is entirely wound up by the living and dying of her relatives; her own fears, at least for herself, are harder to articulate:

O’Mahony has inserted Fiona’s thoughts whilst reading these suffocated, tight-lipped letters (and trying to shape them into poems) in the right margin: ‘Exile is easier now. / An hour in a car queue, / two hours bounced / in a tin-plate catamaran, / a day-trip to a new life.’

The pull towards archetypal femininity is evidenced by Fiona’s superimposed romantic indecision; she resists settling down and moving in with her lover, preferring instead her crumbling quarters, her stacks of dusty books, which are all there to evoke her obstinate grip on individuality. After a pregnancy scare, Fiona finds mixed comfort in the return of her menstrual flow:

so why
no smile
today?

O’Mahony’s book is compulsively readable, especially for those who are attracted to the possibilities of archival research. To those who feel somehow cheated by the actual existence of Margaret Butler’s letters or who are wary of their fictionalisation, I would say that O’Mahony never makes claims to factualness and the result is far more beguiling and intelligent than verse-biography—that supposedly unbiased, murky sentimental mask-wearing. In Sight of Home veers between wry cynicism (on the part of the ‘biographer’ Fiona, who becomes increasingly possessive over Margaret) and genuine beauty, observed off-handedly:

On the sand-bar
shadows search for pickings,
fill their bags, move on.

Closer to shore clockwork
oyster-catchers bob, then take to air
as a radio pips noon.

A black-backed gull
pulls at something
long-tailed.

A car kerb-crawls
for a spot on the sea-front,
fails, resumes the circuit.

I watch a man walk his dog, pause,
read the sing he has seen
every day for a lifetime.

O’Mahony success is that she doesn’t naively enter into her project. In fact she purposefully changes one basic premise to her story: the letters of Margaret Butler aren’t in the possession of a (self-proclaimed) unrecognised writer, they are in a library. By setting them in a private, unauthorised and highly subjective setting, O’Mahony indulges in a scholarly sin. But better that than pretend that the formation of ‘lives’ hangs from cornices of truth. The poet’s genre-bending isn’t a lack of skill or a flagrant misapprehension, it is what brings the story to life.

Dr. Sandeep Parmar is a leading American-British poet of her generation, and an expert on Mina Loy and Hope Mirlees. She makes her home between (in) London and New York. Her poetry appears in the new anthology from Bloodaxe, Voice Recognition: 21 Poets for the 21st Century.

Review of “In Sight of Home” by Bill Greenwell on his Bill Posters blogNessa O’Mahony’s In Sight Of Home (like yesterday, from Salmon Poetry, an Irish press) breaks new ground, both in its choice of form and in its choice of genre. It will be filed, because of its publisher, under poetry, I guess, but it could equally find a home in fiction and biography. It’s a bold writer who composes a verse novel – Pushkin, Nabokov, Vikram Seth are the big names – or a verse biography (Ruth Padel has worked in this field). But this isn’t either of them. It mixes prose and poetry, and it freely mixes known fact, in the shape of a cache of letters written in the mid-nineteenth century by Margaret Butler, from Kilkenny, from Australia, with a fictional writer from the early twenty-first century, Fiona Sheehan, who is conducting her own journey, away from Dublin to  North Wales, and who is working on the letters and turning them into her own poems.

This is a really complicated echo-chamber – after all, we don’t know if Nessa O’Mahony is in any way, shape or form the alter ego of Sheehan; we don’t know (and O’Mahony isn’t telling) which of the Butler letters are made up, and which are original; we have to see if we can skip between the two journeys of (self-)exploration; and, just to keep the mixture rich, we are even given occasional notes by Sheehan about the defects in her poetry, poetry, of course, with which O’Mahony has provided her. And one can easily add to this sense that everything is a bit odd – after all, Ireland, 1850s, potato famine, isn’t it? O’Mahony is having none of this. She presents us with an altogether other kind of historical fact, that of fairly prosperous Irish families going to make a new life. Is it a bird, is it a plane, is it a verse novel? None of the above.

What really works is the cutting between one genre and another, one time and another, and (best of all) the way that minor characters start working their way into the foreground. Chief amongst these is Lizzie Murphy, an almost extraneous figure at first, an orphan Irish girl who finds her way to Australia and into service with the Butler family, before marrying into it. Lizzie’s narrative seems so clearly distinct from Margaret’s and Fiona’s that it almost a shock to find, much later, that she is Fiona’s creation.

In some ways, I think it is the situations more than the characters which grab the reader – the various culture shocks which are encountered, the way in which the main figures are separated from what they know, the way they become entangled with what was and what is, the way they become mixed up (so it is the structure, too, of In Sight Of Home that engages the reader, the ambition of asking the reader to consider on the one hand a rather hapless encounter between a fizzing present day media woman with a chaotic Welsh academic; and on the other hand, the doubly parallel universe – in time and space – of the women in Australia).

This is a really challenging read. Narrative free verse is incredibly hard to do (arguably the hardest of all genres), and also the hardest to sustain. Mixing in the letters keeps the readers on their mettle. One moment you’re with Fiona’s aspiration to have a cat and feed it Whiskas, the next you’re in the outback, writing very proper letters to a cousin. Complexity can be a curse. Not here. You have to go back and read it a second time, a third. I thought it was astonishing.